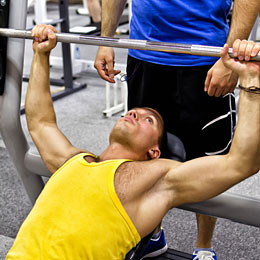 The nuts and bolts of what you need to know…

When someone wants to develop the “upper chest,” generally they are talking about increasing the size of the relatively smaller of the two pec “heads,” the clavicular head. And while there are many effective strategies to address this specific situation, more often than not, one will suggest that the incline press must be prioritized.

Now, whether or not the barbell incline bench press is a great upper chest builder is an argument for another time. The fact of the matter is that the incline press, like every exercise, is a very versatile tool that can be used as a solution for many different situations.

But before we do, be sure to watch the following video for more great chest building tips.

This doesn’t mean that you can’t take a wide grip and lower the bar lower on the chest, but rather that a wider grip is better suited for lowering the bar higher up on the chest – the same can be said of using a narrower grip and lowering higher on the chest. While it can be done, it’s just not ideal, as the cost-benefit analysis heavily favors the risk side of things, although a close grip with the elbows flared out can be an effective way to increase the range of motion that the upper pec is subjected to.

This is important because where you lower the bar will determine how much, of which muscles, are working the most. Remember, the muscle that is stretched the most, is recruited the most, and since there are a few contributing muscles responsible for the same planes of movement here, very slight modifications can have larger downstream effects.

Because of the orientation of the upper chest, and front deltoids, a closer grip which facilitates for a lowering of the bar, lower on the chest, will stretch the lateral portion of the upper pec, as well as front delt, to the greatest degree that can be achieved with an overhand grip, thus leading to an elevated level of recruitment for these muscles. The close grip also facilitates a larger range of motion, and therefore additional emphasis is placed on the triceps to complete the lift.

A wider grip which facilitates for a lowering of the bar, higher on the chest, will pull the medial portion of the upper pec (and sternal head as well) further away from where it originates, thus leading to an elevated level of recruitment for that specific compartment of the muscle. Because of the relative angle of the shoulder, this variation is of higher risk, and therefore relatively lighter loads should be used.

Knowing whether you want to prioritize the “inner,” or “outer” portion of the upper pec, or whether or not you want the shoulders and triceps to more or less contribute to the movement, should determine how wide you place your hands, and where on the chest you lower the bar.

As with a close grip facilitating a lowering of the bar lower on the chest, a reverse (underhand) grip offers the same benefits. With a reverse grip, it’s nearly impossible to lower the bar high on the chest, or flare the elbows out to the side, thus forcing the elbows to remain tight to the body. Because the front delts also have an internal rotation element, and the fact that the lateral portion of the upper pec is best stretched when the elbows are tucked to the sides and the bar is lowered lower on the chest, the reverse grip facilitates greater upper pec recruitment at the expense of the front delts.

When speaking of “incline” presses, the assumption is always that the bench is angled at 45 degrees – this assumption speaks for both modifications outlined above as well. But the angle of the bench will heavily determine how much, or which muscles, are recruited the most.

Knowing whether or not you want to target more pecs, or front delts, should determine the angle of inclination that is used.

So there you have it. Multiple ways to use the same tool and promote a different result. Each of these techniques can be used in isolation, or multiple modifications can be used concurrently depending on the goal. The way you use the exercise should always come down to what you are using it for – meaning, what is your goal for using it, and what do you want to accomplish from it?