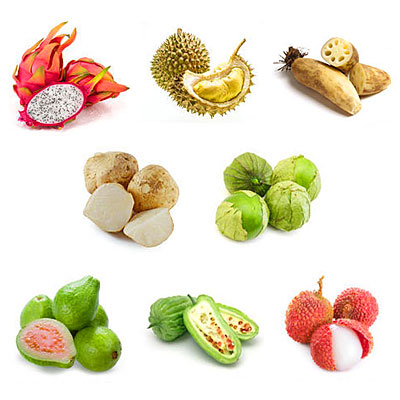 It’s difficult for humans to step out of their comfort zone to try new things, which is understandable because if most people enter a grocery store and see a giant spikey ball labeled ‘durian,’ they’re most likely not going to be fighting each other off to eat it. It’s hard to try something new if you know nothing about it, but at the same time that means you can potentially miss out on a lot of different nutrients and foods you never knew were healthy and delicious. Go ahead, step out of your comfort zone and pick up some of these fruits and veggies the next time you’re grocery shopping! 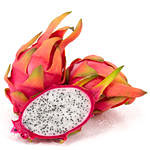 Dragon fruit is grown around Southeast Asia, Central and South America, Israel, and Mexico. If dragons existed, their skin would probably look like the exterior of a dragon fruit. It is classified as a type of cactus and comes in three different colors, but is most commonly seen with a thin dark red outer skin accompanied with a white or pink interior filled with edible seeds like those seen in kiwis. In fact, dragon fruit tastes like a cross between a kiwi and a pear. The easiest way to eat a dragon fruit is to slice it in half with a knife and use a spoon to scoop out the flesh.

Dragon fruit is low in calories and contains nutrients such as vitamin C, calcium, phosphorus, in addition to fiber and antioxidants. It is comprised mostly of fiber, especially when compared to the amount of fiber found in other fruits. This lets you feel fuller faster and can therefore be a great tool for those struggling with or hoping for better weight management. The high amount of antioxidants found in dragon fruit work against the free radicals circulating around your body. By eliminating free radicals, antioxidants help reduce the discomfort of physical ailments, but also delay the aging of skin cells as well. 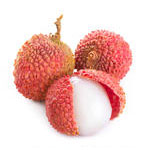 Lychee (pronounced lee-chee) is a tropical fruit native to regions of Southern China, Malaysia, and Vietnam. The lychee is a heart shaped fruit with a rough, magenta colored shell. The peel can easily be detached from the fruit when ripe. The fruit can then be consumed and a glossy brown seed the size of a nickel will remain. The seed is not poisonous, but should not be eaten.

What might be surprising is the fact that lychee is an excellent source of vitamin C. It is comparable to the amounts of vitamin C found in citrus fruits. About ten lychee fruits provide 71.5mg (119%) of the daily recommended value of vitamin C. Lychee is also a good way to consume B-complex vitamins such as thiamin, niacin, and folates. B-complex vitamins act as co-factors that aid the body in metabolizing carbohydrates, proteins, and fats. Research studies suggest that oligonol, a low molecular weight polyphenol, is found abundantly in lychee fruit. Oligonol is thought to have anti-oxidant and anti-influenza virus actions. In addition, it helps improve blood flow in organs, reduces weight, and protects skin from harmful UV rays.1 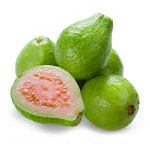 Guava is a tropical fruit that can grow in both humid and dry areas. The fruit is native to Mexico, Central America, and South America. Guavas are generally round or oval shaped and their outer skin, which is generally not very thick, can be consumed. Guavas are green before maturity and become yellow when ripe. After the fruit is sliced open, the pulp inside can be either white or pink in color. Seeds are contained inside the central pulp and can be consumed; however, some species of guava have harder seeds than others. Guava is not as commonly found in Western culture, but has recently made waves in organic markets in dried form.

Guava is rich in lycopene. Studies show that lycopene prevents damage caused by UV rays, which are responsible for aging, and offers protection from prostate cancer.2 Guava also has a blood glucose lowering effect that may be helpful in preventing type 2 diabetes or regulating the diet of those that have it. A Japanese study on guava leaf tea shows that components of guava regulate the absorption of dietary carbohydrate from the intestines and when it was given to patients at high risk of developing diabetes, it curbed blood sugar spies after meals.3 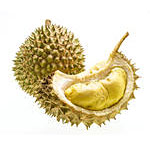 Durian is the wonderfully horrendous smelling fruit native to Southeast Asia. It has been described, in the Western region, to have a powerful scent that resembles a mixture of rotten eggs, melons, and sweetness; however, in Southeast Asia they describe it as a sweet almond custard flavor. Named the “King of Fruits,” the durian is very common in day to day dishes. The odor is so strong that it has been banned on trains and in hotels around Southeast Asia. The durian is a fruit that is relatively new to Western Culture, but its’ strong odor, gooey consistency, and odd-looking shell continues to deter people from trying it. The exterior of the durian looks like the prickly seeds that fall from Sweetgum trees, but has also been associated with porcupines. When the rough exterior is removed, the sweet and juicy interior is exposed.

In addition to vitamins, minerals, and antioxidants common to fruits, durians contain a type of organosulfur that help regulate inflammatory enzymes. This type of regulation can help in decreasing the incidence of cardiovascular diseases. In a study where rats were fed durian in addition to a cholesterol enriched diet (1% cholesterol), it positively influenced the plasma lipid profile, plasma glucose and antioxidant activity. These metabolically beneficial effects of durian might be due to the higher contents of bioactive compounds with various biological activities, such as metabolic enhancers or antioxidants.4 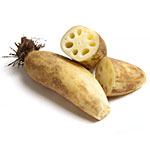 Lotus root has multiple uses around the Middle East and Asia ranging from crispy chips and deep frying to herbal teas and soups, but can be found frequently in Chinese and Japanese cuisine. It has thin skin like that of a potato and when peeled and cut its’ sections reveal symmetrically arranged air canals similar to hub caps on automobile wheels. The root is white in appearance and has a crunchy, mildly sweet texture and flavor that is often compared to water chestnut. Lotus root is most commonly used as a vegetable and is often pickled, sautéed, or boiled and added as a crunchy salad topper.

Lotus root is low in fat while very high in protein and dietary fiber. Though it has not been proven scientifically, it has been commonly used in ancient healing methods to aid in respiratory disease. However, because lotus root juice contains a large amount of vitamin C, it should aid in mucus dissolution within the respiratory system. 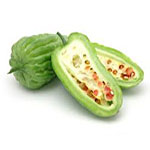 Bitter Melon, also known as bitter gourd, is a very popular vegetable used in the dishes of many Asian countries. It is also commonly used in South American dishes, but the melon is a tropical vegetable that originated in South-East Asia. It has been known to look like an “ugly cucumber” as it has uneven ridges that protrude out of the flesh, though it is still smooth to the touch. The best time to consume the melon is when it is green and firm. When the melon has become soft and ripe or turns orange, it can become overly bitter. Bitter melon is most often served through sautéing and mixed with other vegetables and protein.

Bitter melon has many uses. Both the seeds and the flesh of the bitter melon can be processed to make different types of medicine, but when consumed naturally, it contains a phytonutrient called polypeptide-P, which is a type of plant insulin that is known to lower blood sugar levels as well as a hypoglycemic component known as charantin, which increases glucose breakdown and glycogen synthesis in liver, muscle, and fat cells. This could potentially help reduce blood sugar levels in people with Type 2 diabetes. It also stimulates easy digestion and peristalsis (movement) of food through the bowel and is therefore often used in relieving indigestion and other problems associated with bowel movement. In fact, a study shows that bitter melon has been proven to activate a receptor that causes the death of human pancreatic cancer cells.5 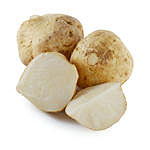 Jicama, also known as the Mexican yam, is a starchy root vegetable grown in the Americas, South Asia and the Caribbean. It has been described as a refreshing, crispy, ice-fruit that can be eaten raw or cooked. Jicama has only recently been gaining popularity in Western culture and can be seen occasionally as a crunchy salad topper; however, in Mexico, jicama is commonly consumed after dicing and light seasoning of chili powder, salt, lime juice, or a combination of the above. The typical jicama looks like a large brown turnip-shaped potato. However, unlike the potato, the skin of the jicama is very thick and cannot be consumed. Each tuber averages about 0.75 pounds, but can weigh more depending on type.

Jicama is one of the few low calorie root vegetables. It only contains 85% water and is around 35 calories per 100g. It is also very low in saturated fat, cholesterol, and sodium. Jicama is also rich in vitamin C, which like other fruits and vegetables, have anti-oxidant properties that help the body get rid of free radicals and aid in protection from inflammation. It has an abundance of fiber such as oligofructose inulin (soluble dietary fiber). Inulin is a sweet, inert carbohydrate. What this means is that inulin is not metabolized by the human body, which can aid in the diets of diabetics or general weight loss and maintenance. 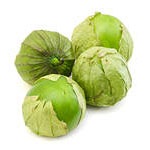 Tomatillo is an important ingredient used in Mexican and Central American dishes and is grown throughout the Western hemisphere. The tomatillo fruit is surrounded by a paper-like outer layer—kind of like an onion, but the outer layer can be consumed. The fruit is typically bright green and has a small spherical shape and should be consumed while firm. Tomatillos can also be yellow, red, or purple, but these colors are not as commonly seen in supermarkets. Tomatillos are valued for their tart flavor, which makes them perfect for salsas or sauces. Otherwise, they are generally fried, boiled, or steamed and combined with other vegetables.

Tomatillos are low in calories. One cup is only 42 calories with around 1.3 grams of fat. Due to its’ low caloric content, tomatillos can be added to a meal to increase satiation without dramatically increasing caloric consumption. Tomatillos contain antioxidant phytochemicals called withanolides that have anti-bacterial and anti-cancer properties. Research has found that the compound ixocarpalacetone contains anti-cancer properties in the colon. In addition, they also prevent the development of heptoma cells.6