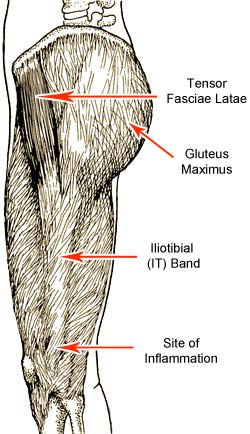 Iliotibial (IT) Band Syndrome: A Guide to Knee Pain Prevention and Treatment for Runners and Cyclists

IT band pain is a frustrating and common problem affecting many runners, cyclists, and exercisers of all types. Pain from excessive friction on the IT band can range from a pesky nuisance to a serious problem. If you feel knee pain on the outside of the knee either above or below the level of the knee cap, chances are good that IT band friction is the culprit. You may feel pain not only during exercise, but any time the knee is in a flexed position, such as when going up or down stairs.

The IT band is a wide, tough strap of connective tissue that starts at the front crest of the hip, travels down the outside of the thigh, and attaches to the outside of the tibia just below the knee. If the IT band undergoes excessive friction near the insertion point, the result is inflammation and pain, often frustratingly recurrent in nature, which makes it impossible to train as usual.

The good news is that IT band syndrome can be prevented and treated. With the right prevention and/or treatment plan, you’ll be able to run and cycle pain-free for a long time to come. Read more to discover the details on how to treat common underlying causes of IT band friction.

The tensor fascia latae (TFL) is a hip flexing muscle that inserts into the IT band and controls its motion. If the TFL is excessively tight, it follows that the IT band will be pulled tight as well. Stretching the IT band itself often proves ineffective, as it’s made of stubborn connective fibers that don’t really take to being stretched. Stretching the TFL, however, is another story. If the TFL is tight, it can be targeted via self-myofascial release as described in the article Self-Myofascial Release with a Foam Roller.

You can also perform static and dynamic stretches for the TFL, such as the static stretch demonstrated on the video above.

For optimal movement, the IT band should be able to slide freely over the muscles it sits atop. In some people, however, the IT band develop small adhesions to the muscle tissues underneath it, and its movement becomes restricted, resulting in excess friction. Stretching alone doesn’t generate enough force to break these attachments, but self-myofascial release can help a lot. Check out the video on the right for a demonstration of foam rolling the IT band.

The gluteus maximus is responsible for preventing excessive internal rotation of the knee. Thus, underdeveloped glutes can be responsible allowing the knee to twist too far inward, placing further stress on the IT band. Perform glute and hip strengthening exercises as part of your training routine so that the IT band is naturally held in the correct position. There are dozens of glute exercises out there. Take a look at the build glutes without weights article to learn about a few simple butt-building exercises that are easy to perform with or without weights.

Overpronation of the Feet

Overpronation refers to feet that flatten out. When your feet flatten instead of maintaining a nice arch, your knees are in a caved-in position, which can lead to IT band friction among other problems. To determine if you’re an overpronator, check the soles of your shoes. If they are more worn on the inside the sole than the outside, it looks like you’re overpronating.

The best first step to correct overpronation is to invest in a quality pair of orthotic inserts that you can wear during exercise. Orthotics instantly correct flat feet by providing arch support. More severe cases of overpronation may require a visit to the podiatrist, who can provide custom orthotic inserts tailored to your arch.

You’ll also want to work on correcting the underlying causes of overpronation, which are related to muscle imbalances which cause suboptimal posture. But that’s a topic for another day.

Environmental Causes of IT Band Friction

Many roads and tracks subtly slope off toward the side. If you habitually run on the same side of the same road or the same track as part of your running routine, one of your knees will be experiencing more impact than the other time after time. To decrease this environmental risk factor for IT band syndrome, vary your route, or better yet, hit the trails! Trail running is much better for your body in the long-term, since trails provide a lower impact surface for your foot to strike.

Treating IT Band Syndrome at Home

OK, so say you have an IT band syndrome flare-up. The side of your knee is achy and painful and although you now understand possible underlying causes after reading this article, all you want in the moment is some relief. If you follow the P.R.I.C.E formula for treating minor injuries, you should experience an immediate reprieve from your pain.

P.R.I.C.E stands for “protect, rest, ice, compression, elevation.” From personal experience, protection, rest, and ice are paramount. When you first injure yourself, protect the area with a brace, especially for the first 48 hours, which will help keep the injury from getting any worse. If you’re experiencing knee pain, immediately ice the area and rest it to feel immediate relief.

To compress, which reduces swelling, you can use athletic tape or a brace. Elevating the area will help also help take swelling down.

Rest is key. Don’t rush back into your normal training routine if you have a flare-up, even if it seems to be better. I recommend you run on an elliptical at first to decrease the impact on the area. In mild cases, exercise can actually help speed recovery time as it sends blood which is filled with repair resources to the troubled area.

If you know you have IT band issues, make sure to ice after exercise to take down any inflammation even if you’re not feeling pain. You can also take an over-the-counter anti-inflammatory such as ibuprofen an hour before exercise to nip inflammation in the bud.

Although IT band syndrome is among the most common causes of knee pain for runners and cyclists, there are other more serious injuries that may be co-occurring or occur in isolation which mimic IT band syndrome symptoms. These issues include lateral meniscus tears, articular cartilage lesions or arthritis. Be sure to rest and consult your doctor if home remedies fail or if pain is severe or persistent.

Do you want to learn more about the anatomy and physiology of the IT band and the TFL muscle?