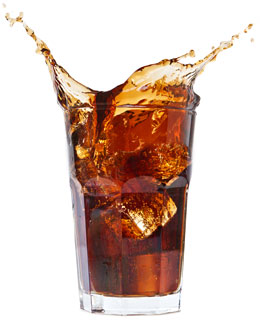 Is Soda Really That Bad?

Juice, soda, and other types of carbonated beverages have become notorious for containing large quantities of sugar that can potentially lead to obesity, diabetes, and other associated detrimental health effects.

For the past few decades, consumption of soda increased to numbers that doubled that of water. Several research studies found that there was a strong correlation between consumption of soda and sugary beverages and the dramatic weight gain and obesity for the typical American consumer. This information was reported in the media and soda consumption began to decrease as several alternatives appeared on the market. Because people became aware of the increase in the incidence of obesity and diabetes, the total amount of soda consumption in the United States has been on a steady decline.

Although common soda alternatives may seem like a healthier option, it may take further examination to decide whether or not this is the case for individual beverages.

What’s so bad about soda? 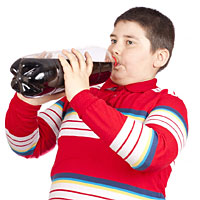 Soda has been linked to a wide variety of unfavorable heath conditions including diabetes, heart attack, and obesity for a few decades and the majority of the population is aware of the potential risks that come with drinking soda, but they may not understand how it directly affects the body.

Something that may be surprising and lesser known is that soda can potentially age you as much as smoking cigarettes.

In a recently published research article, 5309 adults that participated in the National Health and Nutrition Examination Survey (NHANES), a program that is designed to assess the health and nutritional status of adults and children in the United States, were examined to determine if there was any correlation between soda consumption and life span.¹

People that consumed more soda had shorter telomeres. Telomeres are cap-like structures located at the end of each chromosome in all of the cells in our bodies. A shorter telomere length has been previously associated with shorter lifespans, increased stress, cardiovascular disease, and cancer.²

The study also concluded that only soda with real sugar seems to have this effect on telomere length. There is no association between telomere length and diet soda intake. Therefore, researchers concluded that the large amount of sugar that we are able to put into our bodies in a short amount of time seems to be more toxic to metabolism than aspartame, the artificial sweetener used in diet soda. This makes sense because human bodies are not well equipped to handle that much sugar in such a short time span.

Although this study only examined soda intake, drinking fruit juice should also exhibit a shortening of telomere length because fruit juice has around the same amount—if not more—of sugar when compared to soda. 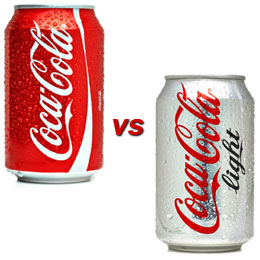 An ingredient commonly found in diet soda is called aspartame. It is often used as an artificial sweetener. It is 200 times sweeter than sucrose (table sugar), so less of it can be added into the food or beverage and the commodity will still maintain the same level of sweetness. Therefore, the addition of aspartame will decrease the caloric content overall. Aspartame is made by joining together the amino acids aspartic acid and phenylalanine. Amino acids are the building blocks of proteins and are found naturally in many foods.³

In the past, aspartame has been rumored to be a carcinogen. A few studies concluded that it had potential to cause cancer; however, those studies did not contain enough evidence to provide a concrete conclusion. When aspartame is metabolized in the body, it is broken down into aspartic acid, phenylalanine, and methanol. Methanol is toxic to humans when found in large amounts in the human body. If a liter of diet soda is consumed, the amount of methanol broken down in the body would be around 55 mg. This number is surprisingly minimal when compared to the 680 mg of methanol metabolized after consumption of a liter of juice.³

Unfortunately, studies have shown that drinking diet soda is ineffective for those that hope to lose weight. The recent study concluded that when artificial sweeteners altered microbial metabolic pathways it increased the host’s susceptibility to metabolic disease in mice. A similar effect was demonstrated in healthy human subjects. While it may not induce cancer, the aspartame found in diet soda has been proven to have the ability to change gut microbes. This is important because when the microbes in the digestive tract are altered it drives the development of glucose intolerance and increases the risk of obesity and diabetes.5

Aspartame and other artificial sweeteners may not play a role in the onset of cancer, but overconsumption of these ingredients will alter gut microbiota increasing the likelihood of diabetes and obesity. Therefore, drinking diet soda as an alternative to regular soda may not be the best option as they both lead to the same adverse health effects.

How much sugar is in soda and other commonly consumed beverages?

The above is a table that compares the amount of sugar and caloric content across different beverages with serving sizes of 12 ounces. The information from the table shows that Coca Cola, apple juice, and orange juice have around the same amount of sugar in one serving. Grape juice is seen to have around 20 more grams of sugar than the other beverages. This may be because grapes are naturally higher in sugar compared to other fruits.

Is juice better than soda and other beverages?

From the above table you can see that the sugar contained in juices do not appear to be less than the sugar quantities found in soda or other sweetened beverages. When it comes to sugar, the sugar found in juice is not “better” than the other drinks found on the market because all sugar is the same. However, the difference between soda and juice can be found on the ingredients lists.

One of the major differences is that it is not as common for juices to contain the same artificial sweeteners as those found in diet soda. If consumers purchase real fruit juice they will not be consuming the types of ingredients found in soda. Another difference lies in the caloric content. For sodas, 100% of the calories consumed comes from the sugar added to the beverage. While fruit juice does contain sugar, not all of the calories come from the fruit sugar as fruits also contain vitamins, minerals, and some dietary fiber.

How does homemade soda and SodaStream compare?

A recent trend and a popular alternative to store bought soda is homemade soda or SodaStream. These devices typically take water and turn it into sparkling water. Consumers can then add different flavored syrups to create a soda-like beverage from the comfort of their homes. The syrups added are advertised as having two thirds less sugar than the typical serving of soda. In addition, they boast that their syrups do not contain aspartame or high-fructose corn syrup.

While these homemade sodas may seem like a healthier alternative, it is necessary to remember that they are still made using syrups and they do still contain sugar. People may have a tendency to increase consumption of beverages when they believe that they are healthy, but because these types of beverages still contain sugar, overconsumption may still result in increased risk of diabetes, obesity, and other harmful health effects.

Well then… What are you supposed to drink?

When all of the beverages that people typically drink seem to contain sugar or are unhealthy for you in some way, it’s hard to choose something to drink. It seems that Americans are heading in the right direction as the number one beverage purchased and consumed in the past year was water. Although it may seem bothersome, it’s necessary to think about what you’re putting into your body as it could mean an extra 4.6 years to live. So next time you hear, “And what would you like to drink today?” take a moment to gather up your courage and respond with, “–Just water, please.”