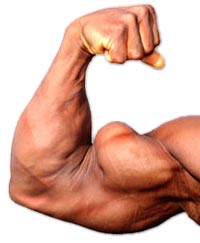 Blast Your Biceps With These Exercises!

The body part that so many guys want to see grow faster is the biceps.  Having strong and lean arms signals a certain level of fitness – a level that many people are not able to obtain.  Many skinny guys find that despite what they do with their training program, their arms are unfortunately the last to grow.

In order to get these muscles to wake up and start responding, it’s going to be important that you shock them with something new.  If you only ever perform the same bicep exercises over and over again, you’re making a very silly mistake thinking that they’re going to grow larger.

Here are some bicep training principles you must start following to get your arms to really start growing.

First things first, it’s important that you don’t get so focused on bicep exercises that you neglect some of the key compound exercises that will allow you to lift more weight.  These are going to be most beneficial for increasing your bicep size over the long run since increases in strength are directly correlated with increases in muscle size, and the best way to increase strength is to lift heavy.

The best compound exercises for biceps are bent over rows, horizontal rows, pull-ups, and pull-downs.  All of these are going to primarily work the back muscles, but will also get the bicep muscles working as well.

Always include these first in your workout when you’re at your freshest point so you can lift a maximum amount of weight.

Focus On Your Weakest Point

Next, you also should make sure to take the time to focus on whatever weak point you have. You will typically be able to recognize what your weak point is by having a look at which exercises you’re unable to lift a higher amount of weight. Do you always seem to struggle with one certain exercise?   If so, you likely just found your weakest point.

Many guys will find concentration curls will stimulate the biceps to a higher extent than say barbell curls and should focus their isolation work around this exercise.  You can position the wrist in a manner that targets whatever angle you’re weakest at (hammer curl position versus a straight bicep curl for example), making sure you’re building strength from all angles.

Some guys also find that they have one arm stronger than the other, so performing single concentration curls takes care of this problem.

Move To An Incline Bench To Maximize Bicep Contraction

Third, a common complaint from a number of hardgainers is that they never feel the bicep muscle actually working during their curls.  This leads them to wonder whether they are actually even performing the exercise correctly in the first place.

In many instances, the problem is actually with the form being used during the curl itself. If you are not placing the full focus on just contracting up that bicep muscle but instead are using many other muscles in the body to do the motion for you – including momentum, it is not surprising your biceps will not be worked.

By shifting your curls over to an incline bench, you will restrict other muscle groups from helping curl the weight up, allowing yourself to see far greater results with your bicep training.

Use Drop-Supersets To Shock The Muscles Into Growth

Finally, if you’d like to really lay on the intensity with your bicep training, consider using drop-supersets towards the end of the workout.  It’s important that you do complete these last since they are going to take quite a bit out of the muscle and aren’t something you’ll want to do when you have other lifts ahead.

Prepare to go all out on these and then leave the gym to give your muscles the time they will need to recover properly and grow back bigger.

What you will do is perform one type of bicep curl (barbell curls for example) and then move directly to another type of curl such as dumbbell hammer curls.  Once both biceps exercises are done, then you will rest for about thirty seconds before completing the series again.

As you progress through your sets and it is starting to become too heavy to lift, then you should do as many reps as you can at the indicated weight, before immediately dropping the weight and cranking out another couple of reps.

This last portion is key to really pushing the muscles past their comfort zone and stimulating maximum muscle growth.

So be sure you keep these principles in mind with your bicep training.  Always remember that you should be including bicep training on your upper body days rather than on a day of their own since this will increase the number of times you can work them each week, which is one of the most critical factors for results.

Change up Your Routine to Maximize Results

If you are already doing a lot of bicep exercises, try doing Drag Curls to change up your routine. The drag curl was popularized by Vince Gironda.

The drag curl drags the bar up your stomach rather than the traditional elbows locked to your sides and curling. This helps concentrate the bicep into a fully contracted position.

This exercise is best done with a straight barbell, but a Smith machine can be used to help you develop the perfect form.

Large biceps are the most obvious show of strength. Focusing on gaining larger biceps okay, but don’t forget to increase your strength in balance with compound exercises. The quickest way to injury is to be so targeted on one muscle group that it overpowers the complimentary muscles.