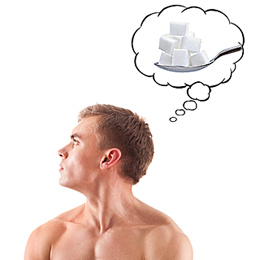 With obesity and diabetes on the rise it’s no surprise that no sugar diets are becoming increasingly popular with both celebrities and the general public alike.

As many of you know already, sugar, or sucrose, is broken down into simple sugars glucose and fructose in the body.

An elevated blood concentration of glucose elicits a metabolic response that releases insulin. Glucose can then be stored in either muscle cells or in the liver as glycogen for that mile you’re planning on running “later.” It also causes leptin, which provides long-term regulation of energy balance that suppresses food intake, to be produced.1

Because of this linear relationship between glucose consumption and insulin production, having a large amount of glucose in the blood also causes elevated insulin levels. If sustained over a long period of time, high insulin levels tend to be associated with an increased risk of chronic diseases.2

Unlike glucose, fructose, if consumed in large amounts and not needed immediately, is sent straight to the liver for lipogenesis a.k.a. the production of fats such as triglycerides or cholesterol. If too much fructose is consumed at once, the liver will not have enough time to process it as a sugar. Instead, it starts producing fats. Therefore, fats in the form of triglycerides are sent out into the bloodstream. High blood triglycerides are a risk factor for heart disease.3 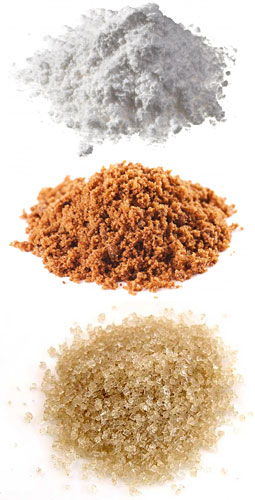 Also known as table sugar,is the most common sugar on the market. The sucrose is extracted from sugar cane or sugar beet and then bleached with carbon dioxide or phosphoric acid and calcium hydroxide. This is why refined sugar has its’ white color. Refined sugar has no nutritional value and can be seen as empty calories.

Brown sugar is manufactured in the same way as refined sugar, but afterwards, molasses is added, which results in its’ characteristic dark brown color. It has a slightly lower caloric value (373cal/100g) when compared to refined sugar (396cal/100g) due to the presence of water, but because the grains are smaller it also packs more tightly.

Raw sugar is refined sugar in crystallized form. Like refined sugar, it is extracted from sugar cane or sugar beet. Raw sugar does not go through the bleaching process, so phosphorus, calcium, iron, magnesium, and potassium remain in the product.

What About High Fructose Corn Syrup?

High fructose corn syrup has received a lot of negative media attention. It has become notoriously known as nutrition’s worst nightmare, but this may be because of its’ misleading name. High fructose corn syrup is made out of 55% fructose and 45% glucose, which is not that much different from table sugar (50/50) and about the same as honey.

Theoretically, if you took a can of soda sweetened with high fructose corn syrup and drank it versus if you replaced it with equivalent amounts of honey and drank it, the amount of total sugar consumed would be about the same. The body does not label the sugars as sugars derived from high fructose corn syrup versus those obtained from honey because all sugars are metabolized through the same pathway regardless of dietary source.4 Instead, the body would see the sugar as 55/45 versus 55/45 ratios of fructose to glucose.

Perhaps the problem is the fact that on average one can of soda contains 33 grams of sugar. Keep in mind that the World Health Organization has recently lowered sugar intake recommendation to 5% of your daily caloric intake due to recent findings in one of their studies. For an adult with a normal body mass index (BMI), that would be around 25 grams of sugar per day.5 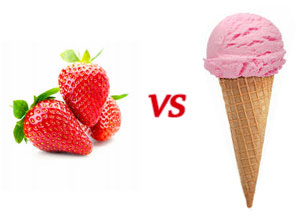 There is essentially no difference between the composition of sugar found in fruits and vegetables and the sugar found in donuts and cakes. On average, all have roughly the same 50/50 glucose to fructose ratio, but don’t use that as an excuse to binge on donuts and cake. While the composition of the sugar is the same, quantity of sugar and nutrient density of the commodity is very different.

Why is it more difficult to finish a pint of strawberries? Fruits and vegetables contain vitamins, water, fiber, and antioxidants and that create the feeling of satiation or fullness faster than if one were to eat a pint of ice cream, which can be considered nutritionally void.

That being said, not all fruits and vegetables are created equally. Here are some examples:

As a general rule of thumb, non-starchy vegetables and berries tend to have lower sugar content. If you have ever heard the phrase “eating a balanced diet” the same can be said in regards to sugars. For example, if you decide to eat one serving of eight baby carrots, a high sugar vegetable, you can complement that with a low sugar fruit like a cup of raspberries for a total of 21 grams of sugar, which is still under the recommended sugar intake per day.

Sugar itself doesn’t pose a problem as it has been around since the beginning of time; however, the quantity of sugar consumed has been increasing alongside general caloric intake. Due to those factors, weight gain, obesity, diabetes, and other cases of weight-related chronic illnesses have also increased.4

It is not necessary to eliminate sugar completely from a diet. Adjusting the quantity consumed should be the main priority.