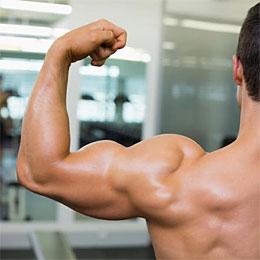 There is nothing that says “I workout” better or more than a nice pair of broad shoulders framing your upper body.  Not only are broad shoulders an attractive feature of strong men, but they also give the perception of a smaller waist.

Essentially, having a nice pair of boulders for shoulders kills two birds with one stone.  They make you look bigger and smaller in the right places simultaneously by adding width to your upper torso and thus making the midsection appear slimmer. However, it does not hurt to already have a small waist or be in the process of shrinking the waist. Enough about the illusions of having smaller waist due to bigger shoulders. Lets get back on topic and focus on the muscles of the shoulder.

The muscles of the shoulder are comprised of three separate parts; the front or anterior deltoid, the middle deltoid , and rear or posterior deltoid.  These three muscles make up the shoulder cap and share a tendon which is why they are commonly referred to as the deltoids or deltoid muscles.  The deltoids are mainly responsible for moving the arm upwards, backwards, out to the side, and assisting the arm abduct and adduct horizontally.

As you can see, the shoulder is a very interesting body part as it plays a role in moving the arm in a number of different directions and planes.  Therefore, it is going to take mastering several different exercises through proper form and range of motion to get those impressive boulder like shoulders.

Just like any other muscle group, form takes precedent when it comes to muscular development.  Using proper form ensures the targeted muscle group receives the stress it needs to grow.  Neglect proper form when doing shoulder exercises and you may end up with over developed traps and underdeveloped shoulders that resemble pebbles instead of boulders.  Now that the importance of form has been stressed, here are some common errors when doing shoulder exercise and how to fix them in order to build those boulder like shoulder caps.

When it comes to bodybuilding exercises for the shoulders, lateral raises are a popular tool used to isolate the deltoids. When done properly, the lateral raise engages all three of the deltoid muscles as well as the stabilizer muscles in the shoulder known as the rotator cuff muscles.  However, like all other exercises, you can miss out on the full benefit of the exercise if you are not performing it right.  When it comes to lateral raises, mistakes are easily made by using too much momentum, using an improper starting position, and flicking the wrists or the elbows.

While using momentum during some shoulder exercises like lateral or front raises may help you to lift some heavier weights, it does a poor job of isolating the muscles you are looking to grow through stress.  In addition, lifting heavier weights than the muscles are actually capable of can put you at higher risk for connective tissue injury.  As a result, using momentum is a big no no when it comes to shoulder cap development.

If you want to get the most out of your lateral raises, drop the ego and drop the weight.  When performing any lateral or front raises, pick a weight in which you can keep your entire body steady.  Chances are if your body is steady, you are not using momentum and bouncing around trying to throw up more weight than you can handle.  The key to isolation exercises is to stress a particular target muscle group for growth.  Although using momentum and swinging up weights may make you feel macho because you are lifting more weight, it is counterproductive during such isolation exercises and will leave your shoulders looking less than macho.

This is the probably the easiest correction that can be made for shoulder development when it comes to lateral raises.   Although starting with your hands in front of the body allows one to lift more weight when performing lateral raises, it is because it engages the trap muscles leading to less stress on the muscles of the deltoids.  Once again performing lateral raises this way may make you feel macho, but if you want shoulder growth you will need to drop the weight and perform the exercise correctly.

If the goal is to completely isolate the deltoids, then starting hand position plays an important role when doing lateral raises.  The key to isolating the muscles of the shoulders when doing lateral raises is to begin and finish with your and arms hands at your side.  Starting with your arms and hands at your side initiates the exercise with the deltoids instead of the trap muscles like starting with the arms and hands in front of the body.  Although the starting position of the  arms and hands seems like a subtle difference,  it can make a world of difference in shoulder muscle engagement.  However like I mentioned above, it is a pretty simple fix.

Flicking the wrists and elbows

In a last ditch effort to raise the weight shoulder height, it is not uncommon to see some snap up their wrists.  In addition to snapping or flicking the wrists another common error is extending the elbows with the triceps muscle in an effort to raise the weight higher.  These are both tell-tale signs of using a weight that is too heavy for the exercise.  Drop the ego and drop to a weight that allows you to train the muscle with proper form.

When performing lateral raises the elbows should remain at the same angle throughout the movement. Keeping the elbow angle constant throughout the exercise ensures that triceps muscles are not engaged in abducting the weight.  To ensure stressing the shoulder muscles, pick a weight that allows you to perform lateral raises with your arms at your side while abducting them in a controlled manner until the elbows and shoulder joints are the same height.

In addition to multiple movements in different directions, these shoulder workouts will include a variety of rep ranges to in assist in muscular overload.  Because this routine calls for training the shoulders one day a week, the compound movements, movements involving more than one muscle group, will be geared toward strength with low rep ranges while the isolation movements, movements designed to target only one muscle group, will be geared towards size with higher rep ranges. This ensures that shoulder workout will include both training methods for optimal results.

Having wider shoulders can make anyone’s upper body appear larger while giving the illusion of a smaller waist.  This makes shoulder development through proper shoulder training a must for anyone looking to have a better physique.

Remember, in order to build some boulder like shoulders, they must be trained properly.  Ego lifting may have you lifting more weight and feeling macho, but trust me there is nothing macho about having under-developed shoulders muscle.

When training the muscles of the shoulders be sure to use compound and isolation movements with the proper form through using the correct starting position, the proper weight, and not cheating by using momentum.  In addition, train the muscles of the shoulder cap from a variety of angles and different directions to ensure each head of the deltoid gets stressed in order to provide optimal results.

These are the keys to developing a nice pair of deltoids to make your upper torso bigger while simultaneous making your midsection look smaller thus capping off a great physique.