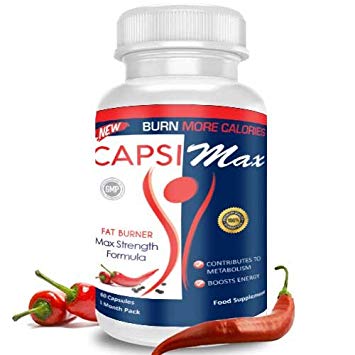 Capsimax is an award-winning proprietary blend of capsicum extract created by OmniActive Health Technologies. It’s a powerful ingredient that’s famed for its abilities as a fat burner and energy provider. Capsimax is becoming an increasingly popular diet pill ingredient and can be found in an ever-growing number of supplements. When used in an effective way, Capsimax is capable of providing incredibly good results and is widely acknowledged as being the most potent and easily tolerated form of capsicum extract available. It is present in the best fat burners available in the commercial marketplace

Peppers also have a long history of use for medicinal purposes and are sometimes used for treating headaches, toothache, menstrual cramps, and sore throats. They are also used in natural remedies for yellow fever and malaria. These abilities and many more appear to be due to the presence of the dihydrocapsaicin and capsaicin that account for 90 percent of the capsaicinoids found in red chilli peppers.

The fat burning potential of capsaicinoids is a more recent discovery and some studies show they provide the metabolism with a boost that is good for 24 hours. By stimulating an enzyme called lipase, capsaicinoids help break down the body’ stores of fat so it can be used for fuel. This boosts energy levels. Capsaicinoids also possess thermogenic fat burning abilities. In simple terms, this means they initiate a slight elevation in body temperature that causes extra calories to be lost into the atmosphere in the form of heat. If you’ve eaten a particularly hot and spicy curry or chilli con carne and found yourself having to mop the sweat from your brow, you have already experienced the thermogenic capabilities of capsaicinoids in action.

The value of capsaicinoids as a weight management aid has been examined in more than 90 clinical trials, conducted in institutes all over the world and involving men and women of all ages, from different walks of life, and with levels of health and fitness that range from incredibly good to very poor. Few diet pill ingredients have been so well researched or have been proven to have such good potential.

For the purposes of one study, that looked into the compound’s ability to increase energy expenditure through the activation of brown adipose tissue (BAT), researchers in Japan recruited 18 healthy men (aged 20-32) and, after an intense pre-conditioning process, some of the men were given a placebo, while other received capsaicinoids (9mg). At the end of the study, the researchers concluded: “Capsinoid ingestion increases EE [energy expenditure] through the activation of BAT in humans.”

Many other studies prove the compound’s ability to boost the metabolism and encourage thermogenic fat burning, but the results of a randomized, placebo-controlled, double-blind, cross-over study conducted at the University of Memphis are particularly interesting because the researchers used Capsimax in preference to other capsaicinoid-providing extracts. At the conclusion of the study, a low dose (2mg) of Capsimax was shown to have significantly increased the amount circulating free fatty acids available for use as a source of energy.

Why Capsimax is Better Than Other Capsicum Extracts

Despite their incredible value in various roles, capsaicinoids can be tough on the digestive system when they are provided in high doses. The pepper extracts used in supplements are very potent and more likely to cause gastric distress than the chilli powders used in spicy cooking. Capsimax allows dieters to benefit from a win-win situation by making it possible for them to reap all the benefits of potent hananero pepper extracts without having to suffer the burn. This is achieved by the use of state-of-the-art “OmniBead” technology that encapsulates the natural capsicum in a special coating, known as a beadlet, that introduces optimum levels to the body without causing any of the burning sensations associated with normal hot pepper extracts. This is made possible because the beadlet is capable of resisting the gastric acid responsible for breaking down food in the stomach. The capsaicinoids are eventually released in the lower parts of the intestine, where they are completely broken down.

The fact that it offers maximum potency while remaining very gentle on the stomach, has allowed Capsimax to become a very popular ingredient and it can be found in hundreds of weight loss formulations. However, despite the fact that it’s one of the most powerful diet pill ingredients available, Capsimax’s presence in a product does not always guarantee its success. Some manufacturers scrimp on the inclusion rate, severely limiting the ingredient’s potential. Others use it alongside other compounds that have the potential to interfere with its abilities and may even work against it. With this in mind, it’s always best to only buy diet pills produced by reputable manufacturers who are known for creating products that offer a high rate of success and have good customer reviews. A strong formulation shows what a product is likely to do, customer reviews show if it is capable of successfully pulling it off.