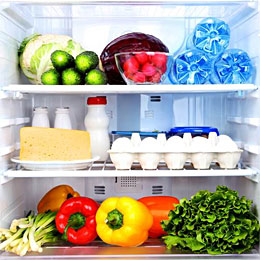 If you’re like the majority of the world, you never think about where you put your groceries. In fact, if you can manage to safely secure your groceries into the refrigerator without apples and celery falling out and hitting your feet, you feel a huge sense of accomplishment as this seems to be a small victory within itself.

If you find yourself constantly throwing out food that turns moldy before the expiration date or take a bite of something only to realize that it has spoiled, reading on could be the solution to your problems and may even save you money on food and possibly even hospital bills in the long run.

Where should you put your bread? Does it matter where you place your meats and eggs? Are there specialized compartments for different types of fruits and vegetables? What is each section of the refrigerator meant to hold? In this post you’ll learn everything you’ve ever wanted to know about storing food in the refrigerator and more.

Where should I store my bread? 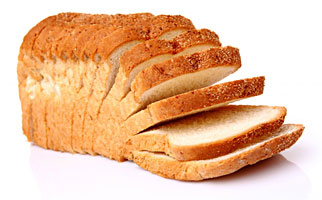 If you want to keep foods for a longer amount of time you store them in the refrigerator. It may then seem counterintuitive that this is not the case for bread. Unfortunately, bread goes stale more quickly in the refrigerator compared to leaving it out on the counter. However, leaving it out on the counter makes for a faster rate of molding. Bread is made out of starch molecules and is susceptible to retrogradation, which is a process that causes starch molecules to dry out or crystallize. Because the refrigerator is kept at a cooler temperature it allows the dehydration process to occur six times more rapidly in bread than it would if was left on the counter.

A previous study found that between 25 and 4 degrees Celsius, water activity decreases as a function of storage time and growth and formation of new crystals in the bread was noted. However at -18 degrees Celsius, water activity remained at a nearly constant level for around 23 days and growth of crystals were seen, but formation of new crystals was absent.1 What this means is that the best way to extend the shelf life of bread is to store it in the freezer. 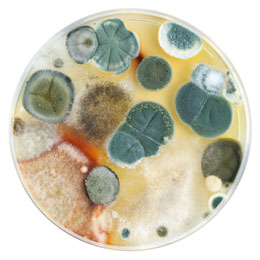 Molds are a type of microscopic fungi that live on animal or plant matter. Many are filamentous organisms that have the ability to produce spores. These spores can be transported through the air, water, or by insects. Most molds prefer to grow under warm and humid conditions; however, because they are highly resilient, they have the ability to survive under a wide range of conditions. Molds can tolerate salt and sugar better than other types of species and can also grow at refrigerator temperatures. This property allows molds to proliferate on jams and salty meats that other types of organisms are unable to grow on.

While some molds can be seen by the naked eye, what is most dangerous about mold is its unique ability to go undetected. Surface molds are easily avoided. Most people are able to see mold such as the green dots that grow on bread or the gray furry substance that shows up on deli meats, so these items typically get thrown away. By the time mold is visible to the naked eye it can be classified as heavy mold growth. However, underneath and around where the mold is visible you can expect a reverse tree like structure of roots and hyphae (branching filaments) that is much greater than the area of the visible mold itself. The network that thrives under the surface of the visible mold is very difficult to see without a microscope and can remain undetected deep within the food, which means that it has potential to be consumed–and that is where the danger begins.

Some molds can cause respiratory problems and allergic reactions. Mycotoxins are poisonous substances produced by certain types of molds. These types of toxins are capable of causing disease and death in humans and other animals. Mycotoxins are generally found in grains and nuts, but they have also been seen in grape juice and some types of produce such as celery and apples. Of these mycotoxins, aflatoxin is the most notorious and most researched of all. Aflatoxin is a type of cancer-causing poison produced by particular types of fungi. It is mainly found in field corn and peanuts.

Are all molds bad? Can I eat moldy cheese? 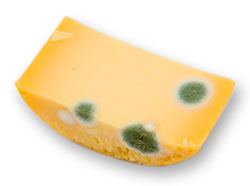 Some molds are actually used to make certain kinds of cheeses and are some times left in or on cheeses. Cheeses classified as blue veined cheeses like Roquefort, Gorgonzola, and blue are made through inoculation with the bacteria P. roqueforti. Other types of cheese such as Brie and Camembert, contain white surface mold. The molds used to manufacture these types of cheese are safe to eat.

If you see that your cheese has grown mold should you throw it out immediately? The answer is that it depends on the type of cheese. If it is considered a hard cheese like Parmesan, Cheddar, or Swiss it is possible to cut out the mold and salvage the rest of the cheese. Make sure to cut out the white or green mold and two extra inches surrounding the moldy area to be safe. The reason why this is possible with hard cheeses is because mold is not able to spread as quickly in comparison to soft cheeses like goat cheese or cottage cheese.

What to do if your foods are constantly molding? 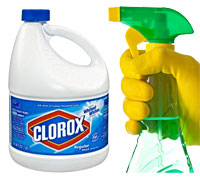 Because molds grow through a branching mechanism, the safest course of action is to throw out all food that has molded or contains a pungent odor. Some ‘hard’ foods like cheese can be salvaged as mold does not spread as quickly. However, ‘soft’ foods are more likely to contain mold throughout the entirety of the food item as it is easier for the roots or branching mechanism to spread.

If you notice that several of your foods are molding at once it may be because there are mold spores circulating in your refrigerator. Because mold spores are very resilient, there may be spores left in your refrigerator from a previous moldy food item or from a food that is currently molding. Mold spores from one currently molding food item can be transferred to a nearby food item. In that case, it may be a good idea to thoroughly clean your entire refrigerator with bleach. Don’t forget to clean out the crevices as well!

Where should I put food to increase shelf life?

There are a few general rules to remember when thinking about refrigerator usage. The main function of a refrigerator is to keep perishable foods from spoiling due to bacterial growth, which is why most refrigerators are set to a temperature below 40 degrees Fahrenheit. In order use your refrigerator most efficiently, you must know that an empty fridge will cause uneven temperatures and an over-filled fridge will prevent proper cold air circulation. The door area and lower part of the fridge is warmer than the rest of the refrigerator. That being said…

Which foods ripen out of the refrigerator?

Avocados and bananas ripen out of the refrigerator. When they have reached the desired amount of ripening, store them in the refrigerator to prevent them from spoiling. Although their skins will turn black or dark colored, the fruit inside will still be safe to eat.

The same applies to melons. Melons can be left out to ripen. After they are cut, store them in the refrigerator to prevent further ripening.

Which foods do not need to be refrigerated?

Refrigerating potatoes adversely affects the flavor. Potatoes release gasses that affect foods that surround them, so be sure to store them by separately in brown paper bags. Plastic bags can trap moisture and speed up the decay process. Do not store potatoes with other food items, such as onions, because the gasses released by potatoes will cause them to rot.

Coffee beans or grounds should also not be refrigerated because condensation in the refrigerator causes the coffee to lose flavor. Instead, store coffee in an airtight container and place it in a dark, dry storage area.

Hopefully after reading this article you’ve gotten a few new ideas that you may be able to apply to your own refrigerator. Try to experiment with different storage methods in order to decrease the amount of mold and increase the shelf life of your food as everyone’s refrigerator is slightly different. By doing so, you might be able to save food and money in the long run!