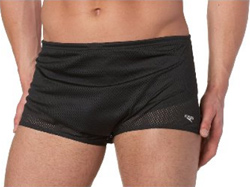 What are the Functions of the Pelvic Floor in Men?

Guys, when you hear the term “pelvic floor,” you might immediately think of ladies doing Kegel exercises. Or maybe you’ve never heard of the pelvic floor or given it any thought at all. You may be surprised to learn that you have pelvic floor muscles as well, and that they play a key role in deep core stability as well as your sex life!

Pelvic floor exercises for men are often prescribed to after prostate surgery, but that’s certainly not the only time they’re worth doing.

Your pelvic floor muscles form the foundation of your abdominal cavity, providing support for internal organs such as the bladder and intestines. Exercises such as weight lifting create extra intraabdominal pressure; the pelvic floor muscles are help the internal organs stay in the right place. They also help stabilize the spine through their ligamental and fascial connections.

Additionally, there is a growing body of evidence that strengthening the pelvic floor enhances sexual function in men, and in some cases pelvic floor exercises have even cured men of impotence!

What Muscles Make Up the Pelvic Floor? 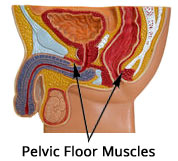 The pelvic floor is structured as a sturdy sling which originates on the inside of the pubic bone and attaches to the coccyx, the pointy bone at the end of the tailbone.

The muscle mainly responsible for moving the pelvic floor is the levator ani, composed of two separate pieces: the iliococcygeal and pubococcygeal muscles.

The small, fan-shaped coccygeus muscle supports the action of the levator ani.

How to Locate Your Pelvic Floor Muscles

You might not have even known you had pelvic floor muscles, let alone how to locate them, but it’s actually pretty easy once you know what you’re doing.

While urinating, squeeze the muscle that stops the flow midstream. If you can do this without tensing your glutes, abs, or anything else, congratulations, you have located your pelvic floor muscles.

Don’t stop the flow of urine in this way repeatedly as an exercise; it’s just intended to be a strategy to help you locate the pelvic floor.

The core is the location of the body’s center of gravity and the place where functional movements originate. The pelvic floor forms the base of the core musculature. It has an important stabilizing function, working against gravity and intraabdominal pressure to support the abdominal organs, all the while assisting in stabilization of the spine alongside the other core muscles.

If you focus on stabilizing and strengthening other core muscles, it doesn’t make sense to neglect the pelvic floor. A weak pelvic floor can lead to improper support of you intestines and bladder, which can lead to prolapsed organs, especially in serious athletes training heavily or in sadly in older folks just going about their daily lives.

Men strengthening their pelvic floor under a doctor’s supervision have reported better sex lives as a result of theexercises. Stronger pelvic floors have been linked to stronger, easier to achieve orgasms as well as heightened sexual sensation due to all the nerve endings housed within the muscles.

Moreover, several men experiencing impotence who were prescribed pelvic floor exercises reported their impotence vanished as their pelvic floors grew stronger. The main reasons for this may have been increased blood flow to the area as well as heightened sensation. More research needs to be done to better establish the link between men’s sexual function and muscle tone of the pelvic floor.

An unstable pelvic floor can cause a good deal of mischief, including incontinence and impaired sexual function. In more severe cases, organs may become prolapsed due to inadequate support.

Strengthening the pelvic floor is quick and easy, requiring no equipment. There’s really no good excuse not to exercise your pelvic floor! You can even do pelvic floor exercises in public and no one will notice!

The best exercises for the pelvic floor are commonly referred to as Kegels. Kegels were invented by and subsequently named after a gynecologist named Arnold Kegel.

Perform this short exercise sequence three times daily for maximum benefits. Once you have achieved good tone in your pelvic floor after several weeks, you don’t need to do them as often.

Repeat the sequence of slow pull-ups and fast pull-ups for five minutes.

Go through the whole sequence again at least twice more throughout the day, for a total of three sets.