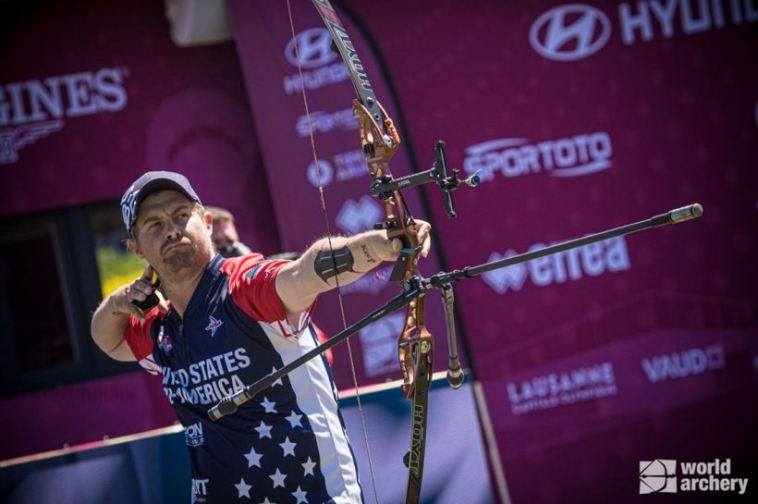 Now that we’ve come up for air from the pandemic that made an Olympic games impossible in 2020, we can finally get back to the highest level of competition in archery.

While there is a great deal of prestige to be earned in World competitions, there is no greater prize for archers than Olympic gold. The U.S. Archery Team boasts some of the most talented sharpshooters in the world, perhaps none more prolific than Brady Ellison, the number one recurve archer in the world, who has emerged as the favorite in the Recurve Men’s division.

In this article, we’ll discuss Ellison’s legendary rise to the top of his craft.

Who Is Brady Ellison?

Brady Ellison – nicknamed ‘The Arizona Cowboy’ for his roots as a woodsman in Glendale Arizona – had a rough start to life. A rare blood disease left him with leg braces as a child, but he would overcome this affliction to become a successful hunter before age 11. He married Slovenian archer Toja Ellison (Cern) in 2016, and they have one son (Ty Cooper Ellison) born in 2020; the three of them reside in Globe, Arizona.  Brady has a second nickname, “The Prospector”, so-called because of his ability to “find gold” (medals) like the panhandlers of early America. Ellison has served as the resident athlete at USA’s Olympic Training Center in Chula Vista, California at various intervals since 2006.

Ellison was a bit of a prodigy, garnering success in archery as a teen with the compound bow before switching to the recurve at the insistence of youth coaches. It turned out to be sage advice, as Ellison would go on to win his first international gold in team archery at the Pan-American Games in 2007 at just 19 years old. Brady’s first Olympic success was a silver medal in the team recurve competition during the 2012 Olympics in London. He would return to win silver and bronze in the team and individual competitions, respectively.

Outside the Olympics, Ellison’s career includes countless gold medals won between 2009 and 2020. This includes gold finishes at the World Championships in 2013 and 2019; The World Cup (2010-12, 2014, 2016);  The World Indoor Championships (2009, 2012); World Field Championships (2014, 2016); and the Pan-American Games (2007, 2011, 2019).  Ellison became a household name in 2019, when won gold at both the World Cup and World Championships to solidify his place as the number one recurve archer in the world. He set numerous world records during this run, including becoming the first man to finish on the podium at five different events during a single World Cup. He currently has one of the longest active streaks at number 1 in the history of World Archery rankings, and he has remained among the top ten for more than a decade. His overwhelming success in archery allows him to partner with numerous archery equipment brands, and also he has his own authentic apparel line.

Unsurprisingly, Ellison is favored to win gold in the Recurve Men’s archery competition in Tokyo’s upcoming Olympics. The qualifying events for men’s archery took place in Paris in June, where the U.S. was one of the last to qualify for the men’s team competition. Ellison, along with Jacob Wukie and Jack Williams, provides the U.S. with one of the more talented squads in the games. Wukie was a member of the 2012 men’s archery team, when he joined Ellison and Jake Kaminsky to bring home a silver medal.

Ellison is also seeking individual gold in this Olympics, arriving at the games with a renewed sense of vigor as he arrives fresh off a Stage 3 win in the Hyundai World Cup (also the men’s Olympic qualifier), and a perfect 900-round score with the recurve bow. It is the first and only perfect round score ever recorded with the recurve, which Ellison says is his greatest accomplishment in professional archery, despite all his big-stage winds. As Olympic gold is the only prize that has eluded Ellison in his storied career, expect the 32-year-old archer to make the most of the upcoming opportunity.