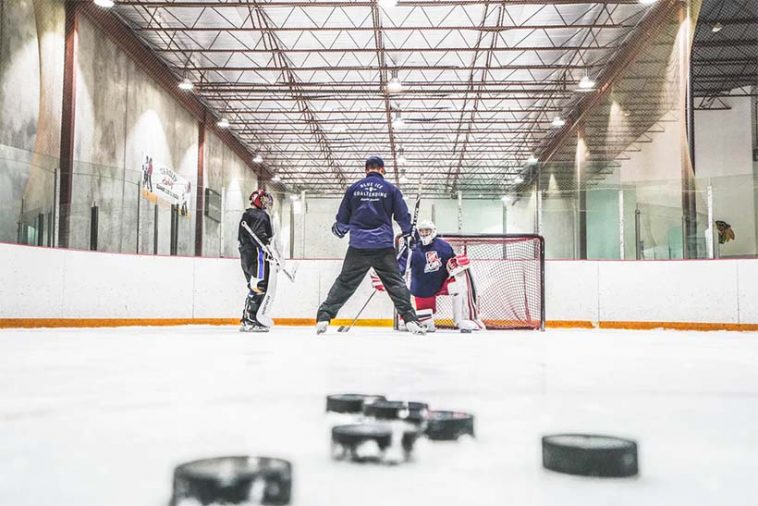 And if you want your athletes to win those hockey games, you need to know that your programs are better than any other programs your competitors are making.

Naturally, you probably already think that your way is the “best way” of doing things, we all have our biases.

But in reality, there is no way of really knowing whether a different approach could be superior to what we are currently doing for this particular athlete at this particular time.

There’s always so much going on at once, with new sports science research coming out and with the ever-evolving hockey athletes that you’re working with.

So, how can you guarantee yourself a competitive advantage over every other team in your league?

Well, if this is what you’re after, then a really good way in which you can start spending your time is by thinking about this question…

How EXACTLY are strength gains from training transferred into real hockey performance?

The best place to start is to look at the sports science data behind how a movement like a barbell squat transfers to more functional athletic movements such as jumping, sprinting, skating, or changing direction quickly.

The Science of Strength Transfer for Hockey Performance

Strength is a physical quality that is very specific, meaning, the gains of strength seen in an exercise that you’re doing are always greatest in that specific movement pattern.

So, even though strength does transfer to other movements (for example, improvements in the barbell back squat can/will lead to improvements in vertical jump height), the movement you did in the first place will always receive the most strength gain (you will gain proportionally more in the squat than you will in the jump).

The degree to which you see an athletic movement improve after making strength gains with a “gym exercise” is what we would call strength transfer.

Transfer depends a lot on the similarity of exercises and movements across all of the ways strength can transfer, and not just the movement pattern itself.

However, since the movement pattern is the easiest to see, this tends to get talked about the most, and therefore is replicated the most through embarrassingly “specific” hockey functioning training.

For example, tying a hockey stick to a cable tower and doing resisted “slap shots” — this couldn’t be more ridiculous and useless for hockey players, yet the movement pattern appears similar so it is easy to sell on its supposed transferability.

A well-meaning but incorrect coach will try and add resistance to anything that looks like hockey and call it “functional training”, then the parents eat it up because they have the thought process of:

Well, it looks like hockey and it doesn’t look like a bodybuilding movement so it must be hockey specific training!

This is too simplistic and disrespects the sports science training program design principles.

In the end, the parent is left with a kid that didn’t get results and the hockey coach is scratching his head wondering why his supposed functional training program didn’t work.

Let’s have a look at what real hockey specific training is and identify the best course of action moving forward.

When the term “functional training” started gaining massive popularity, strength and conditioning coaches in the hockey world stopped talking about how to figure out which exercises transferred best to hockey because it was assumed that the movement pattern (i.e. if the exercise looked like something they would do on the ice) was the only thing that mattered.

Don’t get me wrong, movement pattern does play a role in transferability, but it doesn’t play the only role.

Within the framework of utilizing sport specific exercises for hockey, there are eight different ways in which you can choose an exercise that is going to be beneficial for hockey performance:

When you break that list down you can begin to take the “movement pattern” blinders off your eyes and instead analyze the exercise that you’re using properly and gauge to what degree it’s going to transfer to an on-ice game setting.

When you put your ability to be agile and change direction at a high skating speed under the microscope, you’re going to find that it is largely governed by:

This is where you can start to see why the barbell back squat is an excellent exercise for hockey athletes and how it can transfer into the world of agility by improving your ability to change direction at top speed.

The barbell back squat is primarily a quadriceps exercise, and secondarily a hip extensor exercise.

Beyond this, the squat works these muscles at both moderate and long muscle lengths — similar to what they would be subjected to during a breakaway or when receiving the puck along the boards and needing to laterally explode in the other direction (i.e. receiving as pass as a winger from your defensemen in your zone).

So, there is a degree of transfer here for sure.

However, it, of course, isn’t the only exercise for hockey agility as it lacks the deceleration, speed mechanics, acceleration, and directional loading (a squat is only vertical, whereas skating is multi-directional) required for a complete approach to hockey agility.

In order to make the barbell back squat more specific for the individual demands of different hockey athletes, you can make simple adjustments to improve the degree at which your application of the exercise is deemed more or less specific for hockey performance.

For example, if an athlete needed to improve their deceleration ability — we could implement a longer eccentric phase count, or, utilize weight releasers so that the eccentric loading aspect of the movement is greater challenged (and therefore the muscle involved in decelerative strength get a better training effect).

Another way to attack this is by simply adding in more movements to create a more well-rounded effect, this is where creating targeted hockey performance workouts comes into play.

Barbell jump squats can be a great high-velocity alternative for acceleration transfer, and good mornings or hip thrusts can provide the horizontal force production needed for explosive power and stability.

From there, lateral and diagonal reaching lunges can be utilized to produce force in multiple directions while still loading the muscle tissues through full ranges of motion.

Using a combination of all the above means we are checking many of the boxes required to create optimal hockey agility (at least from a physical perspective, I would still include mental reactive training within the program somewhere as well) without needing to get outside and do ladders, cones, or hurdles.

“In The Gym” Hockey Agility Workout

The above workout example utilizes a Contrast Training method to where the body is loaded (in this case with a barbell) and then immediately unloaded to a bodyweight-only movement to create maximal explosive power.

This method is incredibly well documented within the research to create excellent gains in strength, power, speed, explosiveness, and muscle mass — yet to the untrained eye it may not appear as though it’s an agility workout because there is no sprinting or fancy equipment involved.

Sprinting can be involved elsewhere in the program in order to have a more complete approach, but understand good and well that this workout right here is highly specific for hockey performance, even though the movement patterns aren’t replicating exactly that of which you would see in a game.

Identifying which exercises provide the most transfer to a real hockey game setting is an equation, but it’s far from unsolvable.

If you are prepared to put in the work to look at the biomechanics, muscles, and energy systems involved — you can begin to create much more effective training programs for yourself or for the hockey athletes that you’re training.

Using the above 8 bridges of transfer that I provided will give you a great start to stop falling for all of the “functional training” gurus out there who claim their way is the best, when in reality their way is normally chock full of flaws.

Movement patterns matter, but, a combination of movement pattern plus understanding hockey exercise strength transfer at a fundamental level is where you will find your real competitive advantage.

I showed you an example of a workout today for agility that can be done in any commercial gym, yet, most coaches would say that’s impossible.

With the right knowledge and the right coach, you can get a hockey player better at hockey no matter what equipment you have access to.