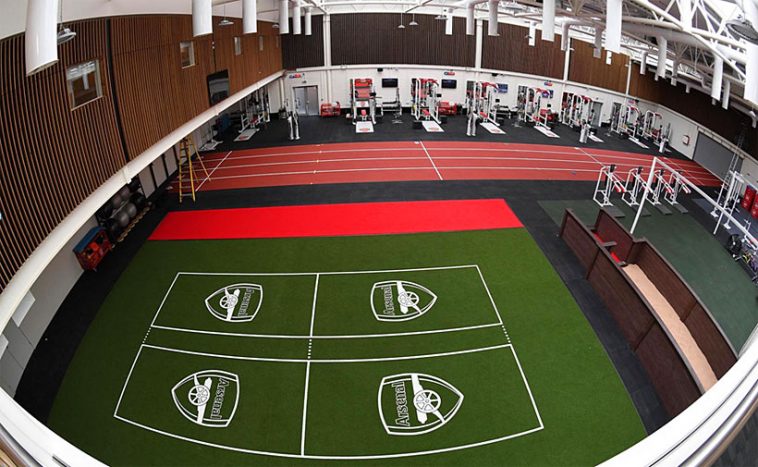 Elite level sport can often come down to the finest of margins. A misplaced pass or a tense muscle can cost a team or individual a chance at glory.

Sometimes, it’s easy to forget just how much effort goes into each and every player. Especially at the top clubs in Europe, there are hundreds of people behind the scenes making sure that the players are in as good a shape as can be. There are physiotherapists, sports scientists, masseuses, and nutritionists putting in the hard work.

Clubs are investing more and more money in this growing industry. Arsenal are one of the best-known clubs on the planet and have a training ground befitting of that status. The redevelopment of their London Colney base was completed in 2018 to the cost of £40 million and inside, the club is going to extraordinary lengths to ensure the players have the edge.

The club’s London Colney base was originally constructed back in 1999. Former manager Arsene Wenger had a major role in the decision to build the Arsenal Training Centre. At the time, it was at the forefront of sports science and viewed by many as a pioneering step for the game.

However, in the twenty years since then, rival clubs caught up. The Gunners eventually fell behind a whole host of other sides, both in England and the rest of Europe in terms of facilities. This is why the decision was made to improve on the London Colney base, allowing it to take the form it does today.

The redevelopment is quite extensive. Now, the Training Centre is a 145-acre site with 11 football pitches. The gym from the 1999 construction is now only fit for the youth teams with a state-of-the-art facility taking its place. The new gym – or Player Performance Centre – is designed with fitness and injury recuperation in mind from ceiling to floor, literally. The floors actually change in levels of resistance, allowing players to advance through the stages of recuperation.

There is a cryotherapy chamber where temperatures can drop to -160 degrees, described by the club’s former Head of Performance Darren Burgess as “an ice bath on steroids.” The club has found that cryotherapy on the day before a match will improve the player’s sleep quality as well increase testosterone levels. There is also a hydrotherapy pool, ice baths, swimming pools, steam rooms, and a sauna.

These constructive elements go alongside technological features. The club has utilised virtual reality technology for training purposes. The system cost over £100,000 and allows players to relive situations they or someone else had been in. It affords players the opportunity to see in-game moments and helps coaches talk them through in-game decisions and how to improve.

Electronic tablets are used throughout the centre for things like personalised daily workouts on gym machines. The tablets are also used by players each morning to order their daily meals, a crucial part of life as a pro. The club even has renowned chef Raymond Blanc – or one of his understudies – preparing their post-matchday food.

Food and technology coincide with the use of a dual-energy X-ray absorptiometry (DEXA) machine which monitors the players’ body fat levels.

“We use a DEXA machine quite often,” said Richard Allison, the club’s Head of Nutrition.

“We have one on-site, as a marker of success. We have objective markers. It’s a very, very good way of influencing or motivating players to stick to those meals.

“We republish the results of the squad in the dressing room and that’s a good motivator. When they are at the bottom of the list or have slipped, then their interest in nutrition suddenly picks up.”

The club uses GPS data from training to dictate what each individual player should be eating. From there, that information is shown on television screens in the canteen and it’s up to the players. The on-site chefs will create whatever is asked of them and cater to the dietary requirements of each player.

It’s all about the so-called marginal games for clubs like Arsenal. Last season, they missed out on Champions League qualification – and an estimated £35 million according to the Guardian – by one point in the Premier League. That’s how fine the margins are for top-level sports across the world today.

The £40 million spent on the new training facilities would almost be recuperated in a single season should they qualify this time around. They are 21/20 to finish in the Premier League’s top four this season on Betway as of 30 September. Should they achieve that feat, the money spent on redeveloping the London Colney training centre will be seen as a shrewd investment.